Firstly, my apologies for completely skipping November. I was travelling at the time and it was pure chaos so by the time I got back it seemed a little silly.

This month we don’t see much Cross Buy love with only Titan Attacks being available for all three platforms, but we do finally see the introduction of our first true AAA title on the PS4 with Injustice : Gods Among Us.

Injustice: Gods Among Us (PS4) 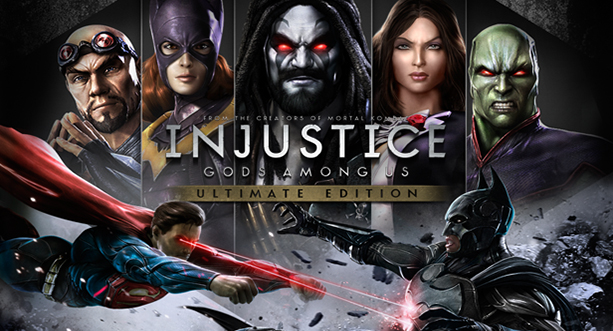 I have to admit I’m not a massive fighting game fan. I do enjoy playing them but I don’t specifically like forking out money for them as I simply don’t engage on the same level as the true masters learning all the moves lists and such. Therefor I’ve always been more of a fan of games like Dead or Alive that flow quite easily with a casual button masher such as myself and not as rigid as many of the more hardcore games.

Injustice seems to strike a nice balance, as I found it easy enough to pick up and play but at the same time playing the tutorial I realised there is an incredible amount of depth to it which the more hardcore players will surely enjoy.

The game looks great although I must say the colours are quite muted for this type of game and the interactive environments are also pretty awesome and seemingly matched to the DC Comics superhero (or antihero) characters of the game.

Overall it’s nice to finally have a fighting game on the PS4 that I didn’t have to spend money on and I’ll definitely be playing more of it. I wasn’t able to check out the story mode as the download hadn’t quite finished.

A little bit weird is that this is the first time ever I’ve seen a game where the cinematics actually look crapper than the game. Why on earth didn’t they just do in engine video sequences?

My first impressions of the game upon seeing a trailer was pretty much that it’s Dead Nation but in a Wild West setting.

I was mostly right in that regard except for the fact that there is no offline story mode and everything is pretty much online multiplayer. I did spot something about split screen but I can’t comment on how exactly that works or if it’s simply two local players going online together.

A bit of a showstopper in a way as I was hoping for a single player experience, but I had a few quick rounds online and the game was good fun. It does seem like latency might have been a bit of a worry or I just sucked too bad at the point and pull firing dynamic. Local lobbies should answer that problem soon enough as it appears to be peer-to-peer multiplayer.

Much like Dead Nation it’s a case of controlling character direction with the left analog stick and aim direction with the right. You can then choose a primary weapon per character and a secondary weapon that you can switch to as need be. There is also a cover system of sorts and a quick dive away from the action.

Don’t judge a book by it’s cover as they say.

Well this one looks properly asstastic based on the little bit of the game I had seen before actually playing it. Turns out it’s a modern day Space Invaders clone but actually pretty awesome for it because it works on a level after level upgrades system where you can buy supplies for the next level.

I ended up playing it (on the bog) way longer than I expected to and it held my attention for quite some time with one retry after another.

It’s also the only Cross Buy game this month which means everyone gets it. For some reason I just couldn’t find it on the PS3 Store.

Technically with this being a trilogy it means the PS3 got five games this month.

The fact that they split them into three separate downloads should also be considered a bonus as you don’t need to download the entire lot to start playing.

I didn’t check them out all over again considering I know the series quite well, being the original modern day true stealth game that took things rather seriously.

Basically you play as Agent 47 in a third person stealth capacity (although it can be player in a more action style as well in later games) not unlike Metal Gear Solid and Splinter Cell but with a much less military focus and way more one man army style.

Sadly the original game is not included, but then I guess it wasn’t really all that and probably wouldn’t have stood the test of time against the others. So essentially you start at the second game Silent Assassin, then on to Contracts and finish off with Blood Money.

Yes they are older games spanning from 2002 through 2006 but the gameplay is still solid and even the graphics aren’t all that bad if you can switch your brain off a little.

I knew nothing at all about this game when I fired it up. All I could surmise from the thumbnails and the introduction was that it appears to be a survival horror game or some sort.

Turns out it’s quintessentially Japanese in every single way, something I generally try to avoid wherever possible. Dodgy voice acting everywhere with characters that are more American than Americans because they originated from a Japanese opinion. Quirky gameplay and then just absolute chaos in storytelling that jumps all over the place in the first twenty minutes or so.

Basically it seems you are an FBI Agent investigating crimes while talking to yourself, presumably because you carry some or other spirit entity in yourself. It starts off with your character in some ethereal world talking to two angels. There are numerous child actors in the start of the game, none of which are believable and obviously voiced by adults.

Presentation is very similar to Alan Wake from a general look and feel point of view except for the fact that the frame rate appears to be less than twenty frames per second so the game falls all over itself from the word go.

It’s a bit sad really as it does seem interesting enough and I was engaged much longer than I expected to be.

I started this one up with absolutely no idea what it’s about.

Initial impression were that it’s just another tower defence game with a little bit of a sci-fi flavour to it. As I played more of it though it seems to lean a little bit more to the RTS side of things but I can’t really tell you why.

A fun enough game but nothing revolutionary if I’m honest. If you’ve never liked tower defence games then this certainly won’t change your mind and if you have always enjoyed them this probably isn’t going to beat anything that you are still playing.

Pretty small at only 135MB so worth the gamble I guess.