Firstly it’s like a bloody time machine, I feel like I lost five hours meanwhile I was probably in there for 30 minutes…but the disconnection from reality is very real.

Let’s start at the hardware.

On one hand Sony have really come a long way with packaging and it certainly feels a bit more special than getting my PS4 even did. At the same time there is so much superfluous kak and boxes inside boxes in there it’s ridiculous. Little binds and wrappings and a hundred miles of plastic etc. I don’t know if the version that comes with PSVR + Camera comes in the exact same box as the non-camera version as that might explain it but the box could really have been a third smaller.

Look, let’s not pretend this isn’t a shit show.

Sony fucked it up by not putting a USB port at the back of this bloody console…and even more so had a chance to fix it with the Slim but seemingly don’t care enough and added it as a selling feature to the Pro.

But really they could have made some kind of slim line cable that runs sideways down the channel of the PS4 and at least pretends to hide away.

Same goes for the processing unit itself, that thing could have attached or slotted into the PS4 somehow, even if optionally. And quite frankly the Pro should include all of this because then it would have been a lovely single cable solution and quite elegant.

The part that I REALLY don’t get though is why this needs to an over-engineered slider thingy to accommodate split cabling that needs special symbols so you can plug it in correctly. Why not just a single one piece connector that can only go in one way? How much did it cost to build it like this…why? 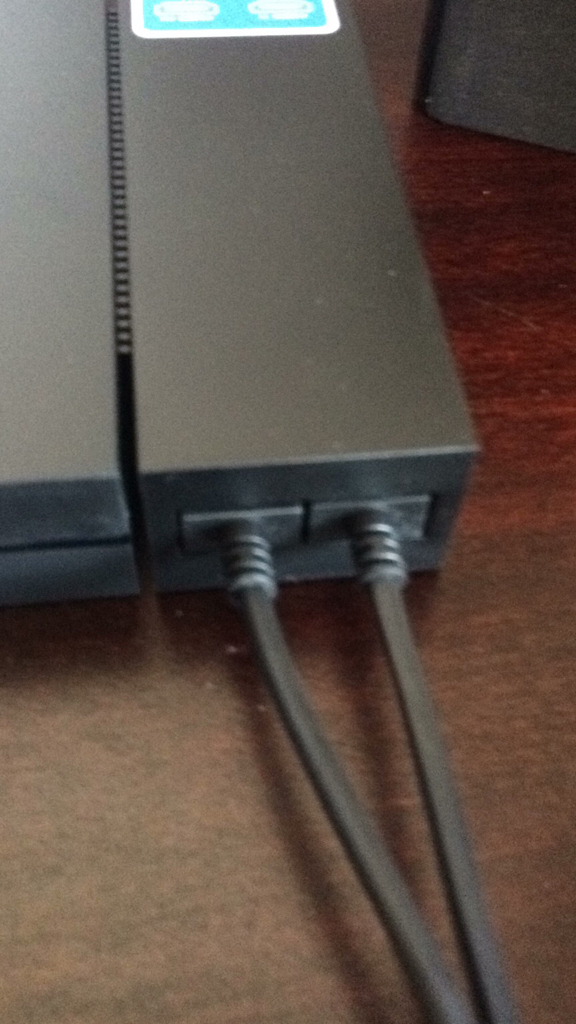 Anyway, fortunately I knew all of the above long before buying it and it was silly then but it’s even more silly now.

Since I didn’t have a camera this morning I spent some time modelling it around the yard and I must say the construction is really elegant and it goes on and off very easily with minor adjustment to settle in and then completely forget about it.

The cord coming out the left bothers me for some reason, maybe because I’m a lefty, but more so because my PS4 stands to the right of my TV and it now cross in front of me. In time I’m sure I’ll run it behind me or even around the couch or something but in these initial stages I did find myself very aware of it.

Getting the Sennheiser Game One’s on was a little bit of a trick but extending them did the job. I’m still not quite sure they are sealing completely but that is probably a good thing.

Comfort is certainly not an issue because by the time you want to take it off you actually forgot all about the headphones and glasses you have on as well and pull the headset off only to find everything else still attached.

One thing that concerns me and that I’m not 100% sure of yet, but I’m convinced I can see the side mounted LED’s bleeding through onto the screen inside the headset. However I only notice this while in full black which is generally during loading screens.

Well there is none and that’s a surprise to me. I thought you get a whole PSVR GUI of it’s own when you switch it on that only lists your VR games, but it seems that was the Demo disc’s own interface and not the entire system’s.

I’m a bit miffed about that actually because now I need to go find my older games that are no longer in the main listing to remember which are and aren’t VR based. It would have been nice to just get an automatic summary of your VR-enabled games and the option to flip to 2D cinema mode when you want to play other stuff.

Sure I’ve done the pupil adjustment and can probably fine tune it some more later, but even so it’s never ever going to be magically perfect. Speaking of pupil adjustment Sony could really just add a slider and a test pattern so you could experiment. At the moment you need to literally go through the whole process and there are many people who figure that calibration is wrong and then set it themselves based on a number of clicks in the interface.

Screen door factor seems to go from one thing to another and I actually only really noticed it in Youtube very specifically maybe because it’s not so interactive. I quickly put on some 360-degree test videos but even on my 20MB it was either buffering and struggling to get up to quality or they were just crap.

I’ll delve into more of it in days to come but I haven’t had the energy to go through too many yet as it does take quite some adapting and I’m also somewhat sick at the moment.

First up I loaded this because I now know the 2D game quite well so it’s an easy comparison.

At first I thought this VR thing isn’t quite what I remembered because there was a distinct notion of it being “over there” and not me being inside it. Fortunately this is more a case of Thumper’s design in that the world does happen in front of you and doesn’t wrap around you really. There isn’t anything to see left, right or behind you.

But it’s a whole different game suddenly and I felt almost like it was easier. Sure I was on the next level I hadn’t played before but so far the game had been brutally difficult and this was easy going. I did feel that even at maxed out volume it wasn’t quite loud enough, but then Thumper does have it’s own internal volume control that is quite low and as I sit here typing I actually seem to remember this was an issue specific to this game and I don’t remember having a problem with the others games doing it.

Again I just sat and played without any drama and just wanted to keep going but needed to force myself to move away so I could check out some other stuff.

It’s a horrible low resolution flaky mess and the controls feel weird and even the menu interface just seems a copy and paste job which is exactly what we now know it is.

Maybe it’s because I’ve been playing Forza of late but it just felt wrong and I can’t see myself wanting to play it.

I don’t want to say I experienced nausea, but there was definitely something funny going on inside my brain while playing this.

Look I reckoned this was overhyped with people pussying out and claiming it was too much for them to finish it etc.

I was certainly right about that as I had no problem getting through it, but even knowing full well what was going to happen I still ended up with heart palpitations and I’m not sure I could physically survive RE6 even with someone holding my hand throughout.

It’s REALLY badly low resolution. Well more so it has a complete lack of any kind of aliasing and the edges are rough and when you start out it’s obviously a fricken game and you wonder how can people get so stressed about this because it just looks asstastic.

Not even five minutes later you forgot all about the pixel problems and you are seriously wondering if your heart is going to make it through this.

One thing I did find pulling me out of the experience completely is that the scale was completely off. My own hands in the game are tiny as well as my legs but it extends to the other guy as well who is physically smaller than a real person would be at similar distances. Who knows, maybe they did that on purpose so it has a less realistic element to it or they were still just finding their feet in this whole VR thing.

The game also requires you to stay stationary as if strapped to the chair which you of course are in the virtual world. I broke it a little bit by sitting forward and then breaking through the other dude’s textures. It would have been nice if they responded to your movement, but this is only a passive experience demo after all.

Well if you can call that passive.

All of that being said I have never felt this alive..or near dead for that matter while playing a game. It’s not even a game, you just sit there but still it’s hectic.

I’m actually reluctant to comment on this one just yet as my opinion will probably change over time and I’ve only spent a short bit of time with it.

This was completely *free* to me in the sense I didn’t fork out real money for it and in fact I don’t even really have money to buy any full games for it this month. So that makes me somewhat disconnected from the value equation.

That being said objectively if you aren’t die hard for the VR thing and wanted to buy this as a surprise to see how it is kind of thing you’ll probably be very disappointed. It’s one of those things where you really need to check your expectations at the door.

I can’t even lie to you, every time I started something up I was like jeez this looks like low resolution ass, but then then when the ball gets rolling you very quickly forget about all of that. It becomes all about the experience and the graphics become less and less important.

So I can’t call it on whether it’s worth it just yet. What I would say is if you really had to graft for months on end to put money away for this then you want to be cautious and at the very least try it out elsewhere to know what you are in for. If it’s completely expendable to you then go nuts.

Personally I’m a very happy camper. I now just need to get my hands on some proper games.

In a perfect world if we could bring five years from now to the present I think a large proportion of the above issues wouldn’t exist. There is definitely a case for the screens not being quite there yet combined with the underlying processing power to make it happen.

PS4 Pro might change this somewhat and I hope to get there this year sometime, but ultimately V2 is going to be where it’s at.

Sorry I haven’t gotten there yet.

But I’ll make sure to try and figure it out and comment on this and other non-game things like Youtube and what not down the line.

Nowhere in my entire experience did I feel sick.

Towards the end of my play session I felt what I can only call “uncomfortable” but not like I’m about to hurl or something. They do recommend getting VR fit and keeping it short at first and I can see why. It’s a little bit like playing Tetris or Guitar Hero for hours and the tracks still running in your vision when you walk away from it.

I also can’t say I’ve felt any eye strain as I had expected being someone who wears glasses and usually not being too comfortable in fully dark environments.

I don’t have the Move controllers (yet) so can’t really comment on those.

Actually can’t really comment on tracking at all as I haven’t really needed it for much.

But looking around I certainly haven’t had any problem.